トップ > App market data analysis: Guide for developers to decide which regions to target next

We took a scientific approach to determining which paths to success are available for app developers looking to expand globally, by utilizing our data and an  analytical approach. With the Google Play Top Grossing charts of 12 primary app markets, we first determined to what degree any two markets shared specific apps in their charts. Secondly, we took a look at the genres that make up the Top Grossing charts and how similar they are between these countries.

We took a scientific approach to determining which paths to success are available for app developers looking to expand globally, by utilizing our data and an  analytical approach.

With the Google Play Top Grossing charts of 12 primary app markets, we first determined to what degree any two markets shared specific apps in their charts. Secondly, we took a look at the genres that make up the Top Grossing charts and how similar they are between these countries.

For the purpose of determining the degree of crossover between The Top Grossing app charts of two markets, we used the following logic:

We constructed a chart to visualize the results, with the degree of similarity indicated by color: 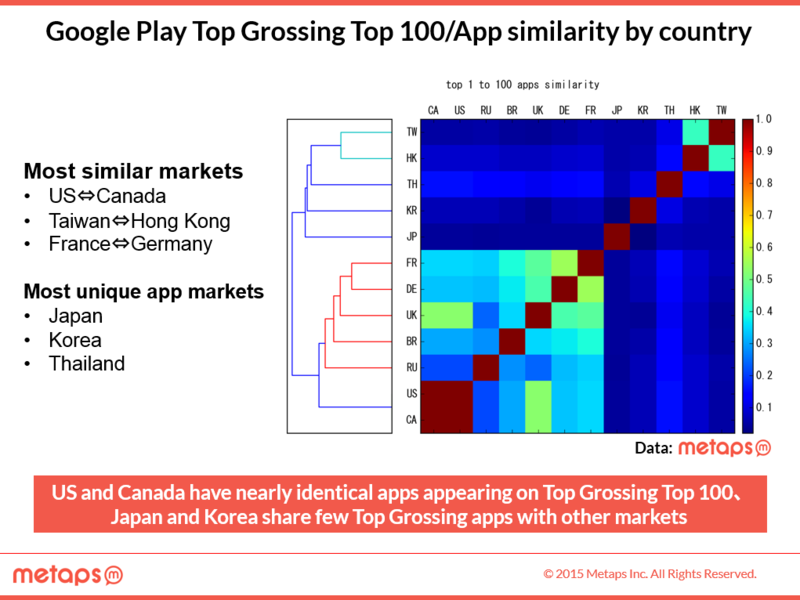 For this study we define the primary app markets as follows:

Out of the 12 primary app markets, the US and Canada were the two markets demonstrating the strongest similarity in the apps appearing in their Top Grossing charts. The shared border and language along with similar cultures play a very strong role here, making Canada a very popular selection for app developers to beta test their apps before releasing in the States and worldwide.

Part of Greater China, sharing a similar Chinese dialect and separated by only about 500 miles, these two markets demonstrate a strong similarity. These are also key markets for Mainland China developers looking to reach Android users, given the lack of a fully functioning Google Play store in China.

With shared borders and languages across Europe, it is not surprising that there should be similarity between European nations. However the degree of similarity between France and Germany and not with the United Kingdom is noteworthy. The UK demonstrates much stronger similarity with the US and Canada.

Japan is often referred to as a "galapagos" island nation, with its unique language and customs, but even from an app market analytics perspective, none of the other 11 countries surveyed in this study demonstrated a strong similarity to Japan.

Likewise to Japan, Korea does not share its border with any other app market and appears very unique in the apps that appear intheir Top Grossing chart. One of the reasons for this is the strong presence of Kakao in Korea, which has successfully monopolized the top of the charts despite showing signs of weakening.

We also isolated the Top 10 and Top 50 to see if there were any notable differences in patterns of similarity. 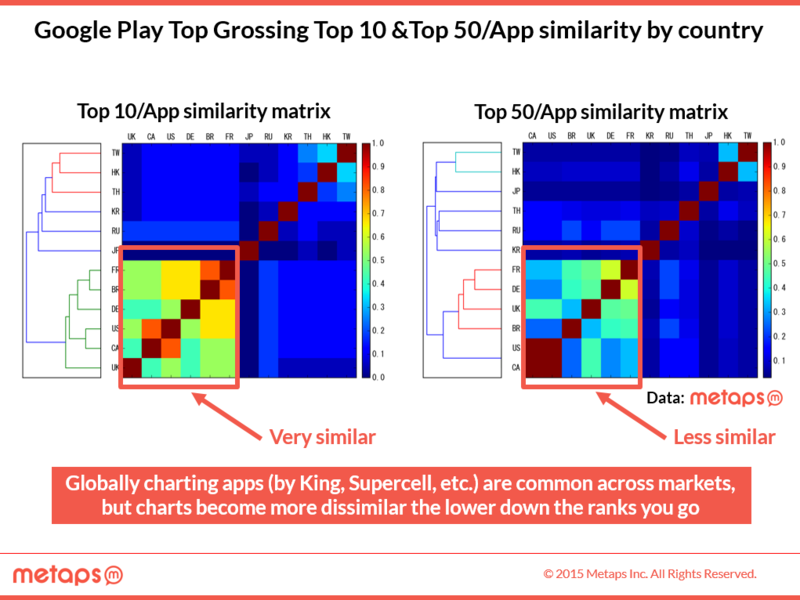 Isolating the very top ranking apps (top 10) of two countries indicate that similar countries demonstrate an even stronger correlation at the top of the charts. This can primarily be attributed to the emergence of globally popular apps, such as "Candy Crush Saga" (King) and "Clash of Clans" (Supercell).

Isolating the Top 50 shows that the lower you go down the charts, countries demonstrate less similarity than they do at the top of the charts. This can be primarily attributed to the prevalence of locally released apps lower down the charts.

To remove the presence of globally popular apps from the equation of similar markets, we also looked at what degree two markets shared app categories appearing in the Google Play Top Grossing chart. 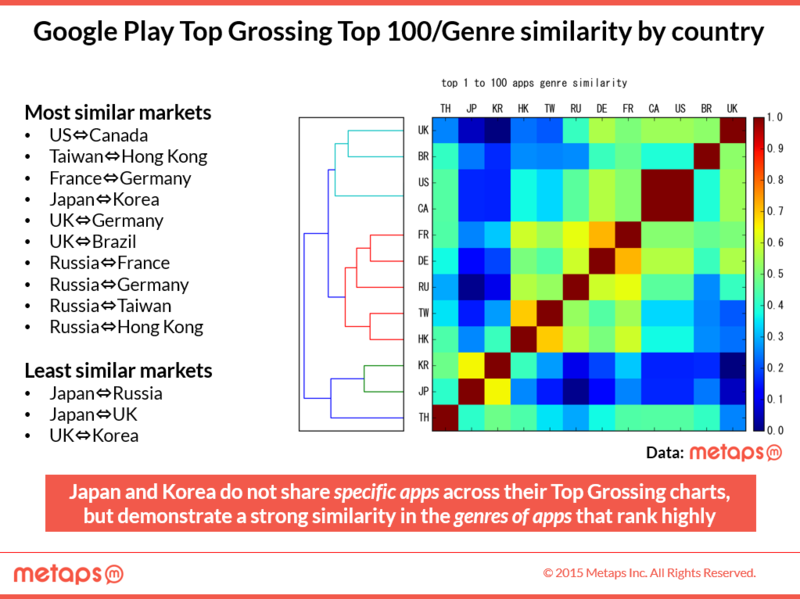 US and Canada Taiwan and Hong Kong France and Germany

The three most similar market combinations for charting categories are the same as when we looked at identical charting apps.

The US and Canada are particularly unique in the frequency of casino apps ranking in the Top Grossing charts for both countries. Compare this with Japan, Korea and Hong Kong, where no apps appear in the Top 50 Top Grossing for any of the three countries. 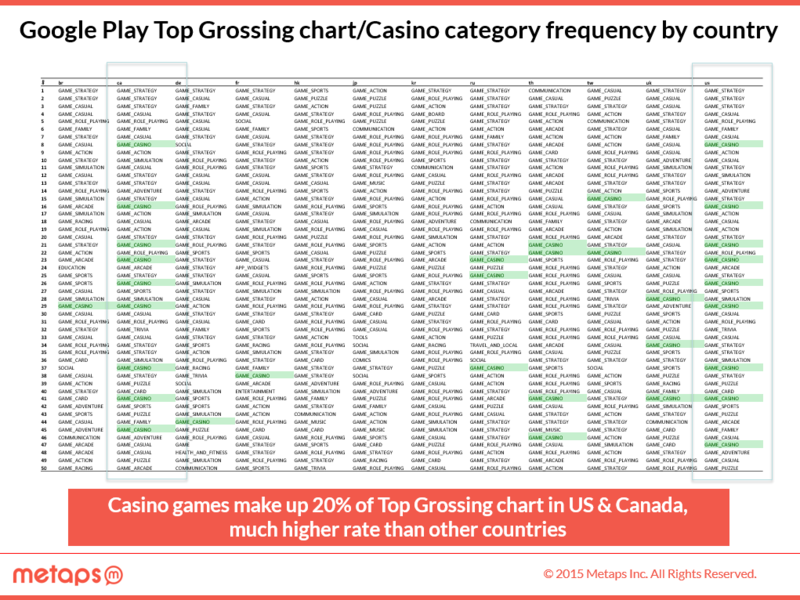 Analyzing popular genres across countries reveals a number of other similar markets.

A total of 30% of the apps appearing in the Top Grossing Top 50 appear are RPGs for both Japan and Korea, only 6% for the US and Canada. By looking at common apps in the Top Grossing chart we determined that both Japan and Korea were "galapagos" markets, but relegating our analysis to genre content we are able to establish a strong connection between the two markets for RPGs. UK and Germany UK and Brazil

All three countries share a strong inclination towards Casual and Strategy games.

All of these markets share the popularity of Strategy games. Russia leads all markets with 40% of the Top Grossing chart being Strategy games, with a total of only 6% for Japan. App developers struggling to monetize their Strategy game might want to consider localizing for Russian users. 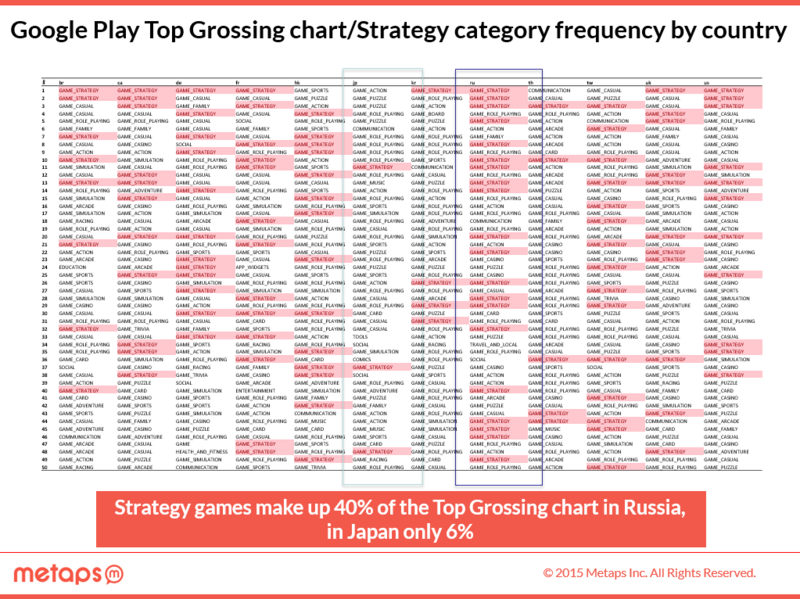 Non-game apps do not tend to chart high on the the Google Play Top Grossing chart, a trend shared amongst all markets considered here. 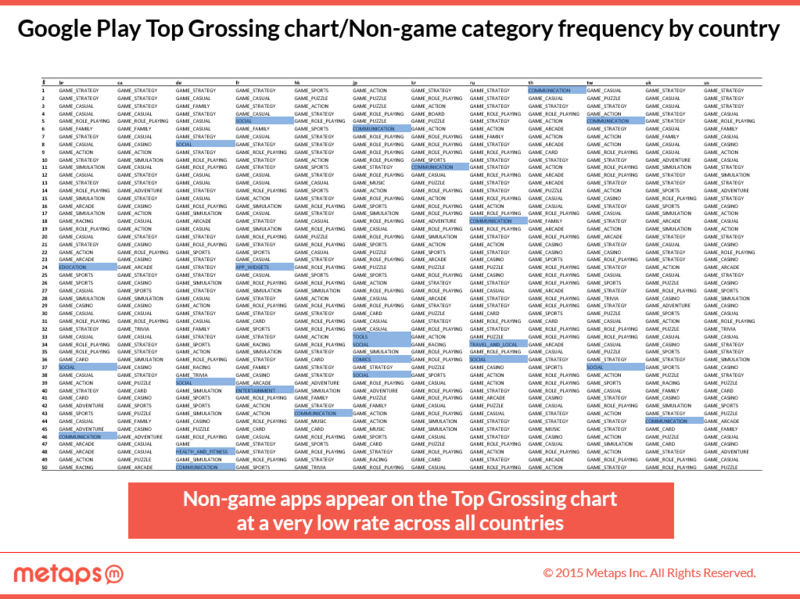 Japan and Russia Japan and UK UK and Korea

We can see the divergence here between markets with high levels of popularity in RPGs and Strategy games.

Metaps supports app monetization by providing app store and other data analysis services to developers. Metaps will be exhibiting at GDC (booth #123) from March 4th to 6th, and if you would like to find out more about how we can help app developers connect your strategy with app data, please contact us for a consultation.