Korea boasts the #3 market for Android apps in the world, behind only Japan and the United States in revenue. In a country that Samsung dominates as its home market, nearly three-quarters of smartphone users are on Android, making Korea a very attractive market for Android app developers. We conducted an analysis of the Korea Google Play Top Grossing, Top Free and Top New Free charts for the month of October.

Korea boasts the #3 market for Android apps in the world, behind only Japan and the United States in terms of revenue. In a country that Samsung dominates as its home market, it is widely reported that over 90% of smartphone users are on Android, making Korea a very attractive market for Android app developers.

We conducted an analysis of the Korea Google Play Top Grossing, Top Free and Top New Free charts for the month of October. 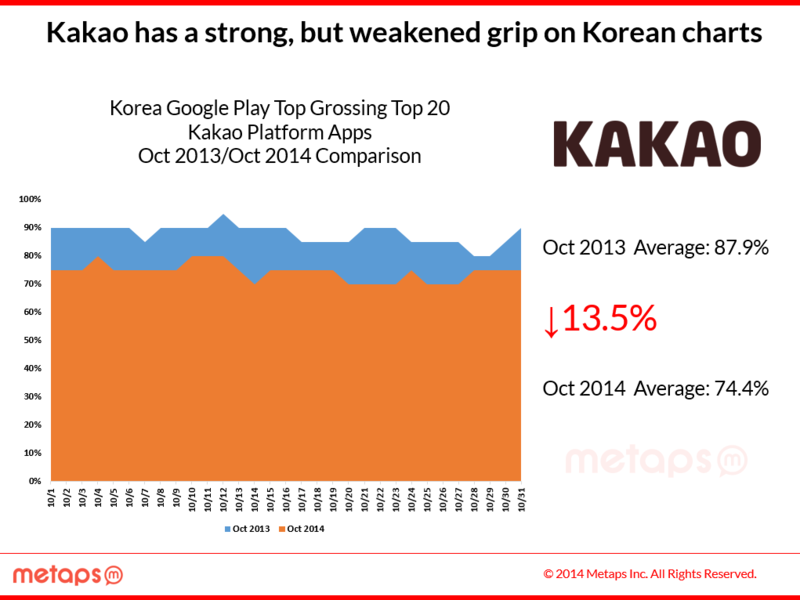 Clash of Clans found success in Korea without Kakao

Worldwide hit games "Clash of Clans" (Supercell) and "Candy Crush Saga" (King) have both found success in Korea, but both taking very different paths. Supercell decided to go it alone with "Clash of Clans", a daunting task considering the dominance of Kakao at the time it first charted in Korea (October 2013). It has become dominant in the market, taking over the #1 Google Play Top Grossing ranking in Korea for the past three weeks. 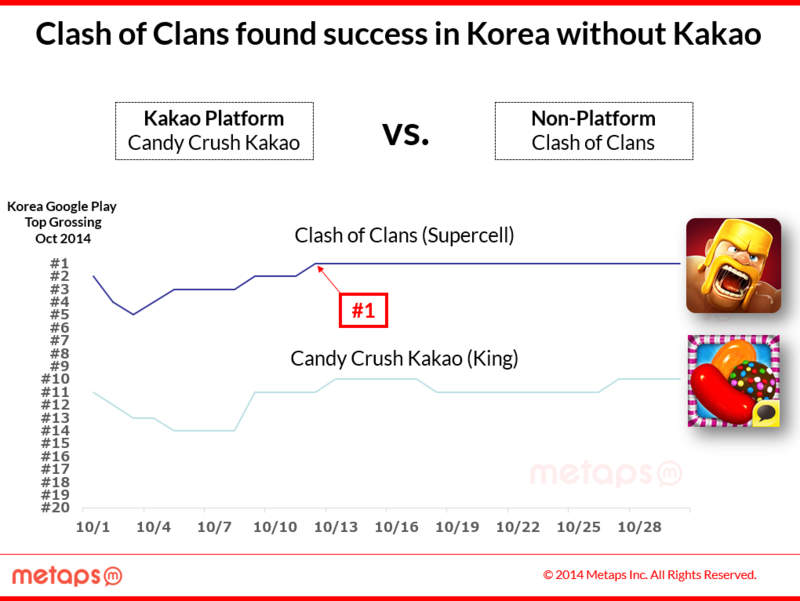 Its success has been supported by an aggressive marketing campaign in Korea started in June, involving prime-time TV commercials and heavy advertising on subway and bus stations (common for mobile apps in Korea). It is highly unusual for an overseas developer with a non-Kakao app to perform this well in Korea, but it may be an indication that, with the right marketing approach, we will see more success stories from non-Korean developers in the Korean market. This has a lot of Korean developers nervous that what was previously considered a very insular app market may no longer be so preferential towards Korean developers. 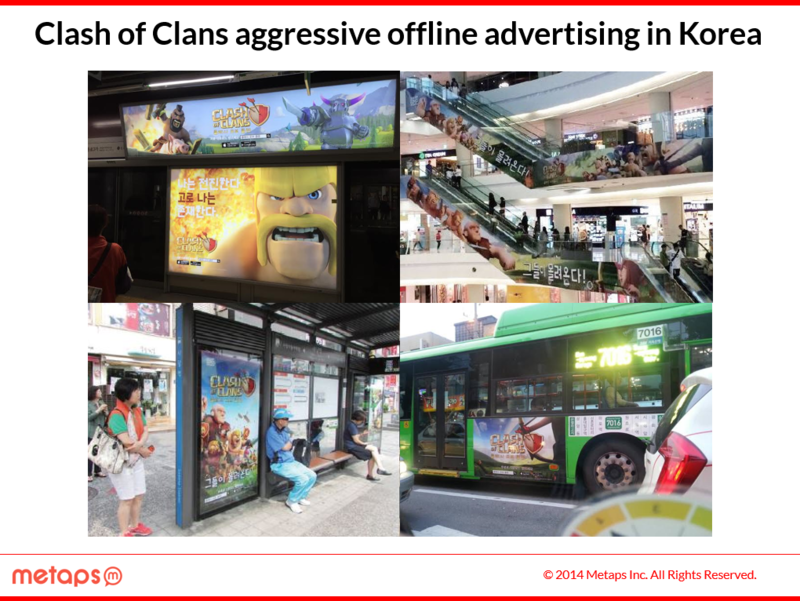 One other success story in Korea has been King, who took a different approach than Supercell by joining forces with Kakao and releasing "Candy Crush Kakao" in Sept. 2013. It has also been well received in Korea, charting regularly in the Top 20 Top Grossing chart, alongside many other Kakao titles.

RPG is top genre in Korea

Role Playing was the top performing category on Google Play in Korea in October. A total of 32.6% of all apps appearing in the Top Grossing Top 100 were RPGs. RPGs were followed by Casual, Sports, Strategy and Puzzle to round out the Top 5. 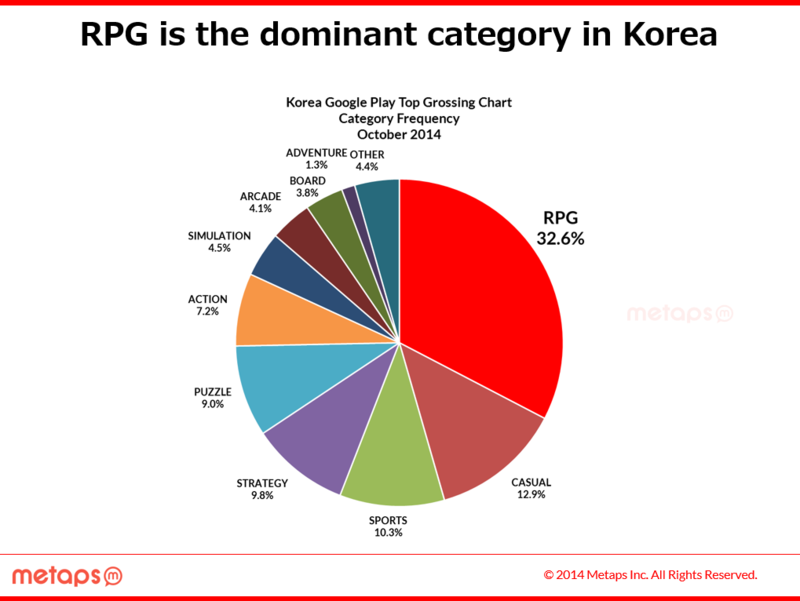 On the Google Play Japan Top Free chart (total downloads for non-paid apps), the Shopping category was the most popular, with a category frequency rate (the rate at which a given category appears on the chart over a given period of time) of 12.4% in October. By comparing these results with the Top Grossing charts, we see a couple of trends.

For the Sports category, which ranks highly on Top Grossing (3rd) with a low rank on the Top Free charts (24th), it is evident that there are a smaller number of total users but they are demonstrating a much higher-than-average ARPU.

On the other hand, for the Shopping category, which ranks highly on Top Free (1st) with a low rank on the Top Grossing charts (no apps entered Top 100), we can infer that while there are a larger number of total users, they are demonstrating a much lower-than-average ARPU.

On the Google Play Top New Free chart, the RPG category came out on top with a category frequency rate of 15.4%. Once again we compared these results to the Top Grossing charts results.

The Sports category ranks high on Top Grossing at #3, and ranks low on Top New Free at #12, indicating that fewer developers are targeting sports game users like they used to.

The Entertainment category ranks high on Top Free at #5, and ranks low on Top Grossing (no apps entered Top 100) , indicating that there are a lot of new entertainment apps being released but they are operating with much lower than average ARPU users. 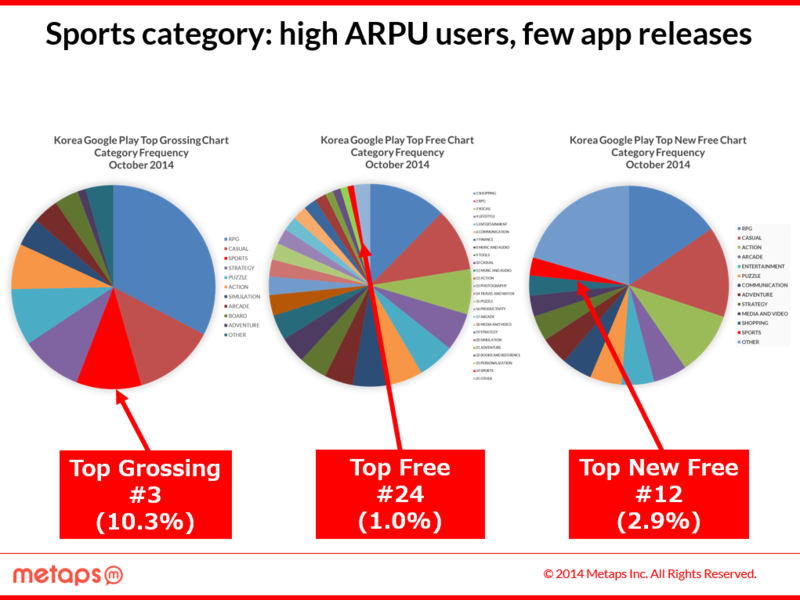 Metaps supports app monetization by providing app store and other data analysis services to developers. If you would like to find out more, please come to our booth at G-Star (B2B zone/booth #M27), or contact us for a consultation.